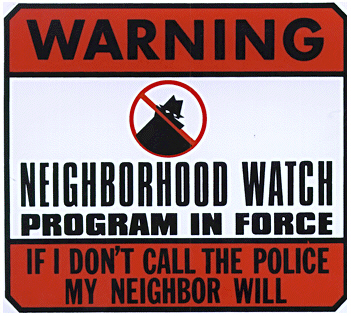 Taking a Stand Against Crime

Neighborhood Watch is one of the most effective and least costly ways to prevent crime and reduce neighborhood fear. Neighborhood Watch fights the isolation that crime both creates and feeds upon. It forges bonds among area residents, helps reduce burglaries and robberies, and improves relations between the police and the communities they serve.

What Is Neighborhood Watch?

It is a neighborhood organized to be the eyes and ears of the police. Reporting suspicious activities and persons to the police as soon as they are observed is very important. Neighborhood Watch is a great way citizen's can work together to prevent crime.

How Does Neighborhood Watch Work?

It operates to educate participants in the principals of deterrence, delay, and detection. It depends on the communication network organized at three levels:

How to Organize a Neighborhood Watch

When to Call the Police

No police department can function effectively without the assistance and support of the local citizens. Some people fail to call the police simply because they are not aware of the seemingly innocent activities might be suspicious. Others may notice suspicious activity and be hesitant to call for fear of seeming like a nosy neighbor. Still others take for granted that someone else has probably already called to report the activity. Don't worry about being embarrassed if your suspicions prove to be unfounded. We want you to call, think about what the result could be if you don't act.