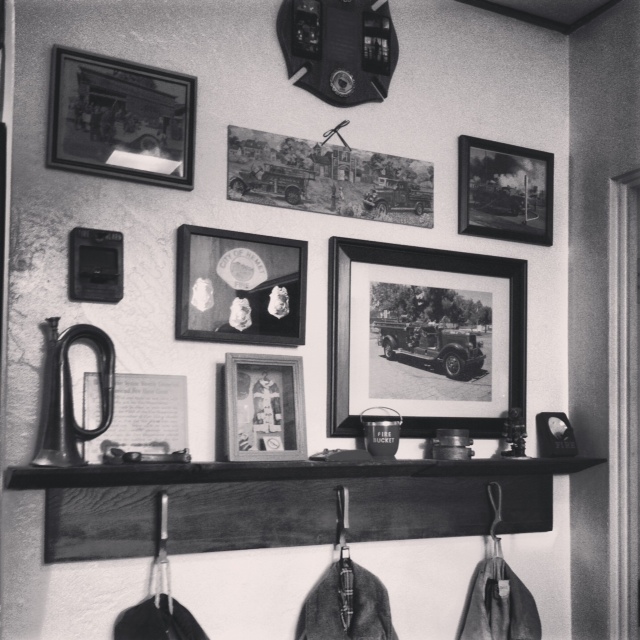 "Protection against fires to be provided at once!"

was the sentiment of a 1908 mid-July Chamber of Commerce meeting. A fire company was to be organized and the necessary equipment provided. Rules and regulations on fire prevention were adopted and regulations for the fire brigade set. The Hemet Chamber of Commerce formed the Hemet Fire Department on July 29, 1908. The newly formed department consisted of 12 volunteers, a 2-wheel hose cart, nozzles, buckets, axes, 2 fire extinguishers, and a 30-foot extension ladder. The first fire station was on the northwest corner of Front Street and Florida Avenue, now part of State Street.

Hemet's first fire chief was Julius Spencer, who served as chief for 43 years, 1908-1916 and 1921-1945. Other members of the new fire department were: J.A. Ritter (Lieutenant), Frank Hann, Fred Heidenrich, W.H. Mann, Mr. Messer, Robert Remmie, R. Parks, Mr. Shaver, J.C. Tickman, and Frank Thompson. Chief Spencer and the volunteers were very instrumental in getting a bond issue passed to upgrade the water system and the fire department. The Hemet firefighters made every effort to provide the services of a modern fire department. When Hemet was incorporated into a city in 1910, the fire department became a city function. Although it was a city fire department, it still served areas outside the city limits until about 1933, when California Division of Forestry started serving unincorporated areas of Riverside County.

Hemet modernized their fire department in 1915 when the volunteers built their first motorized fire apparatus, using parts from a 1912 Cadillac and their 1901 horse drawn chemical hose wagon. A new fire house was also built on North Carmalita Street. This was quite a feat for the department. Not only could it serve a larger area than before, but it could provide assistance to the City of San Jacinto, respond to fires faster, and carry more equipment allowing them to provide a better service. This happened at a time when horse drawn steam powered equipment was still very popular and widely used. With the continuing growth of the city and the fire department, a new fire truck was bought in 1930, giving Hemet two fire engines. The latest in modern fire fighting equipment, a 1929 American LaFrance triple combination pumper was purchased, giving Hemet reduced fire insurance rates. The department still uses this truck in parades and maintains it in excellent condition.

In 1932, the department extended its service to include emergency medical care and made its first medical aid run; a call for oxygen at the Soboba Inn in San Jacinto. The department still provides emergency medical assistance to this day. In 1950, Hemet hired their first full time paid firefighters and fire marshal. These men were Harold Kelly, who was the first fire marshal, Bob Roberts, and Guy Smith.

Growth of the Fire Department

The 1960's and 1970's were a time when the department and fire services rapidly grew to meet the department of a growing city. In 1960, the fire station moved to the new City Civic Center at Latham and Juanita Street, Chief Fleming and Chief Spence became Hemet's first paid full time Fire Chief and Assistant Chief, and additional paid firefighters were hired. Hemet purchased its fourth fire engine in 1963, added a Rescue Company in 1966, built Fire Station Number 2 in 1968, and added a 100-foot ladder truck in 1975.

In 1974, the Hemet Firefighters Association was formed; first for employee benefit purposes, but quickly started to support the community and today supports many programs for youth and schools, fire prevention activities, fund raisers for burn centers, and aid to fire and burn victims. The firefighters have also long supported many programs for senior citizens.

In 1976 the volunteers were disbanded and all city firefighters were paid professionals. This time period also saw changes in fire chiefs. Hemet's fire chiefs have included:

In 1994, Hemet's third fire station was opened, serving the west side of the city. This year also saw an increase in service when firefighters expanded their medical skills to include emergency defibrillation, an advanced life support service for people in cardiac arrest; one of the first programs in Riverside County. In 1996, Hemet Fire Department also established their Hazardous Materials Response Team. This team handles all types of hazardous materials incidents.

Opened to serve the citizens in the southwest portion of the city in 2001.

Opened in the Eastern section of the City in 2005.